World War II consumed nearly every aspect of Americans’ day-to-day lives, including their mealtimes.  The war jumpstarted the American economy, finally lifting it out of Depression. However, the war meant that the nation’s food supply had to be carefully managed in order to make sure that American soldiers and their allies stayed healthy and strong for battle.

During World War II, eating right became a patriotic duty for soldiers and civilians alike. Only a healthy America could win the war. “Is every member of your household strong and healthy?” asked Food For Strong Bodies, a pamphlet distributed by the North Carolina Extension Service in 1942. “America needs us strong now as never before. It is the duty of everyone to know what foods we should eat every day.” Throughout the war years, nutritionists adapted their advice to the scarcity caused by war, tapping into the public’s all-encompassing concern with the war effort to inspire better eating habits.

In North Carolina, the Extension Service promoted this nationwide effort, working hand in hand with federal agencies to mobilize civilians across the state. In many instances, the Extension Service drew people of all types into the war effort through their connection to food. North Carolina Fights With Extra Food declared “Every Farmer a True Soldier” and reminded women that “homemakers can render no greater war service than… keep[ing] the family producing, conserving, and saving.” In Eat Three Meals a Day the Victory Way, Extension Service nutritionists even addressed North Carolina’s young people, calling on them to contribute to the war effort through healthy eating.

During World War II, nutritionists continued their efforts to provide information about how to eat healthfully in a time of limited resources. The home gardens so important to North Carolinians’ diets during the Great Depression got a new name: Victory Gardens. Staying healthy became especially challenging when the government began rationing certain foods in 1942. Within a year, American families could buy only limited amounts of sugar, flour, meats, and fats. Thrift also became an important part of nutrition education. Posters distributed by the Office of War Information, for instance, encouraged Americans to “buy wisely – cook carefully – store carefully – use leftovers.” 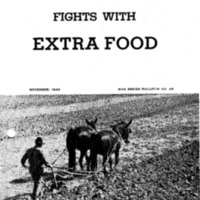 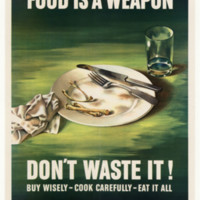 Released by the United States Office of War Information, Food is a Weapon, Don't Waste It!, 1943, encourages thrift. 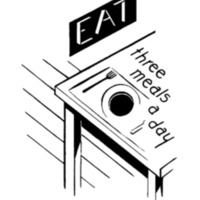 Eat Three Meals a Day the Victory Way, 1943, called on North Carolina's youth to contribute to the war effort through good eating.