Released in 1951, Foundation Foods showcases the Browns, a family of four living in the postwar American suburbs. Mrs. Brown buys the food that she feeds her family at a grocery store before preparing it in a kitchen equipped with all of the modern conveniences—a refrigerator and an oven, for instance, not to mention a sink with running water. She learns about proper nutrition and meal planning not through a home demonstration agent, but through reading, television, and radio. With all the trappings of a comfortable mid-century middle-class lifestyle, the Browns embody the story of prosperity often told about 1950s America.

In North Carolina, though, poverty persisted throughout this unprecedented economic boom, and it is safe to say that the average North Carolinian farm families’ kitchen did not resemble the one where Mrs. Brown prepared her meals: 65% of North Carolina’s farm families were without a kitchen sink, 67.9% still did not have running water in their homes, 49.5% did not own an electric refrigerator, and 35.2% did not have any kind of refrigerator at all. Both Mrs. Brown and the North Carolina farm woman based their families’ diets on the same principles, the Basic Seven. It was just a difference of how these needs were met.

Increase income—stretch your money.
Plan well and spend with care.
To get the most for your dollar,
See that high food value is there.
- Raise a Square Meal Around the Home, 1957

The circular also encouraged the production of 85 to 90 percent of foods at home in order to meet the family’s full nutritional needs on a budget. Using the Basic Seven food groups as a guide, a chart prompts readers to consider whether they will “buy,” “grow,” or “exchange” foods in a particular group and even provides gardening and farming information that would help them meet total amounts needed: “Figure one foot row per pound of vegetables needed” and “1 cow averages 2 to 2 ½ gallons milk daily for 8 months. Have 1 or 2 cows. If only 1 cow, exchange with neighbor or buy milk when cow is freshening.” 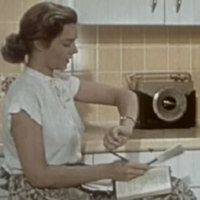 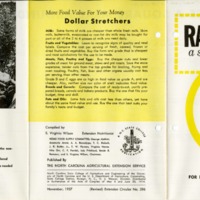 Published by the Extension Service in 1957, Raise a Square Meal Around Home helped North Carolinians develop a food plan that includes buying, growing, and exchanging for nutritional necessities.