There wasn't much cash in the North Carolina farm home in the early nineteen hundreds. There isn't much now. – Jane S. McKimmon, When We’re Green, We Grow, 1945

Making a good living as a farmer was extremely difficult. Many farmers just barely made enough money to cover the basic needs of their families, while others fell short. Aware of the hardships experienced by North Carolina’s rural residents, Home Demonstration nutritionists provided information on how farm families could get the most nutritional bang for their buck.

Milk, for instance, was a particularly good bargain. Among the benefits of milk lauded by nutritionists was its price: “Milk is a Cheap Food” declared Milk for the Whole Family. For North Carolinians struggling to make ends meet, milk provided exceptional nutritional value at a very good price. For farm families who kept their own cows, this was particularly true. Along these lines, Plans for Community Club Work in the Study of Foods and Household Conveniences, published by the Extension Service in 1916, provides detailed instructions on how to properly handle milk taken directly from the udder.

Early guides published by the Extension Service show that nutritionists kept an eye on cost. Plans for Community Club Work in the Study of Foods and Household Conveniences, for instance, includes a section on “Cheap Meats.”  Emphasizing that the main difference between cheap and expensive cuts of meat was not their nutritional value but their texture and flavor, Minnie L. Jamison, Assistant in Home Demonstration Work, gave pointers on how to best cook less expensive cuts of meat. The guide also provided suggestions for meat substitutes and touted vegetables as a particularly good value, especially given the ease of growing them in home gardens.

Nutrition advice often aimed to combat malnutrition, a problem that was all too common among North Carolina’s farm families throughout the first half of the twentieth century. Pellagra, for example, now known to be caused by a lack of niacin (vitamin B3), plagued the South in the first half of the twentieth century, claiming thousands of lives each year. In North Carolina, Extension Service nutritionists and home demonstration agents played an active role in its prevention, even preparing information about a “Diet for Pellagra Prevention.”

Helping North Carolinian farmers eat better for less became a regular theme in the nutrition guides distributed by the Extension Service. Words like “economical” and “value,” for instance, pop up regularly. In times of economic hardship, though, these concerns took the stage, front and center. 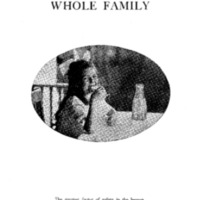 Milk for the Whole Family, 1910s, describes milk as a particularly good value--it not only contains much of what the body needs, it is also available at minimal cost. 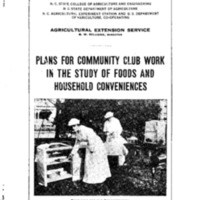 For farm families with their own milking cows, milk was a particularly good value. Plans for Community Club Work in the Study of Foods and Household Conveniences, 1916, includes detailed information about how to handle fresh milk. 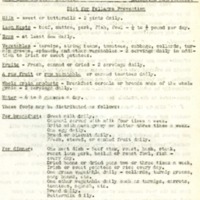