A poster distributed to promote the Basic Seven encouraged Americans with this line: “For Health… eat some food from each group…every day!” Each of the seven groups paralleled important parts of nutrition grounded in scientific studies. Green and yellow vegetables, for instance, provide niacin, which prevents pellagra, while oranges, tomatoes, and grapefruit are among the best sources of vitamin C, which wards off scurvy. However, to accommodate wartime restrictions and scarcities, the USDA bulletin incorporated suggestions for substitutions. No oranges, tomatoes, and grapefruits? The guide suggested extra servings of different “green and yellow vegetables” and “potatoes and other vegetables and fruits.”

Following the war, the USDA updated the National Wartime Nutrition Guide and reissued it as the National Food Guide: Eat This Way Everyday. Prompted by the recent introduction of recommended daily allowances, the revised guide included information about the number of servings from each group that should be incorporated into the daily diet. These servings of so-called “foundation foods” were to be supplemented with additional items to round out meals.

With the Basic Seven, the USDA shared nutrition information visually. The kinds of information found in the thirty and seventy page Extension Service circulars common in the 1910s and 1920s were summarized and represented in a single image. This meant nutritionists had to simplify the vast knowledge about nutrition and highlight the most important parts.

By this time, the USDA had become a leader in nutrition research and advice and a source of national standards. The Home Demonstration division of the North Carolina Extension Service incorporated the USDA’s shifting dietary recommendations into its own printed materials and presentations. A similar rendition of the Basic Seven poster can be seen, for instance, in pictures of home demonstrations events in North Carolina, and the Extension Service’s Raise a Square Meal Around Home used the Basic Seven as a basis for planning foods grown and produced at home.

This poster promotes the Basic Seven food groups that were introduced by the USDA in 1943. In the midst of World War II, the center of the poster reminds citizens that the "U.S. Needs Us Strong," tying good nutrition to good citizenship. 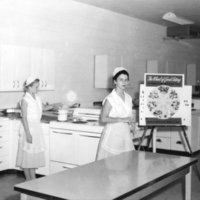 At a 4-H Food Preparation Demonstration in the 1940s, a poster shows the Wheel of Good Eating, which showcases the Basic Seven food groups.