Another important piece of the nutritional puzzle fell into place in 1913, when American scientist Elmer McCollum managed to isolate vitamins A and B, essentially “discovering” a crucial element of human health.

Equipped with the ability to isolate particular vitamins, scientists conducted experiments throughout the 1910s and 1920s to determine the ways in which different vitamins contributed to health. In these experiments, scientists usually fed one group of lab animals a regular diet and another group a diet lacking foods rich in a particular vitamin. The results were quite clear: vitamin deficiencies led to crippling diseases. At the time, many North Carolinians suffered from malnutrition and diseases now known to be caused by vitamin deficiencies. This kind of research, when translated into dietary advice and shared with residents statewide, literally saved lives.

References to “vitamines” appeared in food preparation and meal planning guides produced by the Extension Service as early as 1916, but information about vitamins was still very new and ultimately not well integrated into the earliest nutrition guides. By the 1920s, though, this had changed. Published in 1924, Ten Lessons in Food Preparation and Meal Planning for North Carolina Home Demonstration Club Women emphasized the importance of vitamins in the daily diet. In fact, food specialist Cornelia C. Morris borrowed directly from Elmer McCollum’s influential book The New Knowledge of Nutrition in a lesson about preparing a balanced meal. Some of the suggested menus for just one dinner—a meal we now call lunch—included:

McCollum assembled these menus based on his suggestion that each day, everyone should have “a quart of milk or its equivalent,” “two salads of fresh, raw uncooked fruits or vegetables,” and “one liberal serving of some cooked green leafy vegetable.” The rest of the diet, he explained, should be rounded out according to taste and appetite. By drawing directly from McCollum’s book and mentioning him by name and profession, food specialist Cornelia C. Morris relied on scientific authority to encourage North Carolinians to eat right.

Suddenly, with the discovery of vitamins, the ways in which food was prepared became an important part of nutrition education. Overcooking vegetables, for instance destroys the vitamins that make them a valuable part of a healthy diet. This is why McCollum recommended salads with raw vegetables. Later dietary guides regularly warned against overcooking vegetables, but the first ones only mentioned this fact in passing. When listing advantages of a fireless cooker in Plans for Community Club Work in the Study of Foods and Household Conveniences, Assistant in Home Demonstration Work Minnie L. Jamison wrote: “best of all, the long, slow cooking, no doubt, saves some of the vitamins in which you are interested, for the sake of the best development of your family.”

Vitamins complicated the world of nutrition. Food became more than a fuel that provided energy to the body. Scientists could now prove in the lab what many had already suspected: that food plays a critical role in human health. With the discovery of vitamins, it also became clear that not all foods were created equal. Eating healthfully meant navigating nutritional requirements that took energy needs as well as vitamins into account. Foods with the same number of calories often contained different vitamins, and a proper diet not only meant eating enough, but eating the right combination of foods and preparing them correctly. 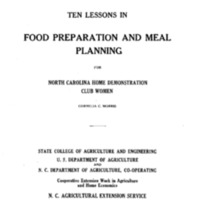 Ten Lessons in Food Preparation and Meal Planning for North Carolina Home Demonstration Club Women, 1924, borrows directly from Elmer McCollum in its discussion of the role of vitamins in the diet. 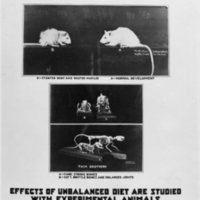 Same Age - Food Made the Difference, 1920s, provided visual evidence of the ways in which vitamins impact health.