John D. Wray and the Fight for Black Farmers

John D. Wray was appointed in 1915 as the first statewide Negro Club Leader for the North Carolina Extension Service and stayed in the position until 1925.  Wray was responsible for organizing agricultural clubs, known at the time as Farm Maker Clubs for boys and Home Maker Clubs for girls, in counties of North Carolina that had not previously had African American extension agents.  In 1916 Wray started the first black crop rotation club, and by 1917 he had also added the peanut club, the potato club, and the cotton club.  Starting in the same year, a major war effort began to take place amongst all of the agricultural clubs nationwide, and Wray formed the Uncle Sam's Saturday Service League in which club members would pledge to work every Saturday to increase food production in North Carolina until World War I was over.  Eventually all of the separate clubs came together under the name of 4-H, but remained racially segregated until the 1960s.

The work that Wray did for the Extension Service was incredibly important because up to that point, black families had a strong distrust of the white extension agents they had met in the past. In his 1920 annual report, Wray is quoted as saying:

"For several years the work has not been understood.  The Negro farmers have been victim of so many fraudulent agents that they were just a little reluctant to allow their children to take hold of any kind of project, it was too free.  He [the black farmer] naturally expected that there was something else behind it.  And too, about this time the world war broke out and false rumors circulated.  It made it exceedingly difficult even to get the children's names because they thought we were agents of the government trying to find out how much food they had so someone could return later and collect it for the use of the army and navy.  They also thought that the corn, pigs and poultry would be taken by the government that they had grown."

Many photographs of various white extension agents and leaders can be found in the records of the North Carolina Agricultural Extension Agency, but efforts to find just one of John D. Wray has turned up nothing.  The simple fact that photographs of white agents and leaders within the records are countless, but a single photograph of Wray could not be located for this exhibit, is proof enough that black agents were underappreciated and their contributions largely ignored. 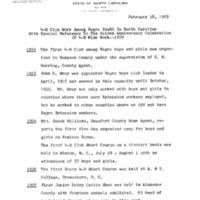 This is a timeline for African American activity in 4-H. The entry regarding 1915 mentions Wray. 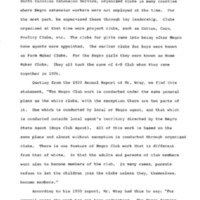 This a brief biographical sketch of John D. Wray.  It does not mention any of his personal life, only the work he did for the NC Extension Service.  A picture of Wray could not be found for use in this exhibit.